Born in the mining town of Morenci, Arizona, Ted DeGrazia became one of Arizona’s most prominent painters, illustrators, and graphic artists, resulting in his studio gallery being listed on the National Register of Historic Places. He lived most of his life near Tucson, and worked in his studio, open to the public, that he called “The Gallery of the Sun.” His signature work is paintings and illustrations of ‘angel-like’ Southwest children, many of them Indian and Hispanic.

He was the son of an immigrant father who was a copper miner for Phelps Dodge Company, but Ted, at age eleven, returned to Italy with his family for the next five years. When he returned to Morenci, he had forgotten most of his English and entered first grade at age 16. One of his teachers decided to Anglicize his name from Ettore to “Ted” because it was easier to spell. He did not graduate from high school until age 23. During this time, the Depression, he had developed interest and skill as a musician and earned money playing trumpet in local bands at houses of “ill repute.” He attended the University of Arizona to learn to paint, but dropping out, went to Mexico City to study fresco techniques with social-real muralists Diego Rivera and Jose Orozco, who in turn were so admiring of his painting that they sponsored an exhibition of De Grazia’s work. He also traveled extensively throughout Arizona, experimenting with ceramics and depicting on paper and canvas local people.

In 1941, a special exhibit was held of work completed during these travels. In the late 1930s, he had his first trip to the Navajo Reservation, which stirred a special feeling for subjects he depicted from that time. Previously he had had much exposure to the other Arizona tribes–Pimas, Papagos, Apaches and Yaquis, but he became especially fascinated with the seemingly empty land, life around the trading posts, and children herding their sheep. He returned to Tucson from Mexico in 1943, and built an adobe studio and in 1945 earned his Master’s Degree in music and art.

His illustrations for greeting cards brought him early attention among Arizonans, but he was hurt that the University Art Department showed little interest in his accomplishments. This rejection caused him to go it alone, so he built his own gallery in Tucson from adobe and decorated it with Indian and Mexican motifs. His paintings were devoted to subjects related to the history of the region, and he was fascinated with the purity of their life before the infiltration of white civilization.

However, the busyness of Tucson caused him in 1951 to build another gallery he called Gallery of the Sun. It was modeled after haciendas on Mexican ranches and was located in the Santa Catalina Mountains north of the city. About that same time, he formed a friendship with Buck Saunders, a gallery owner in Scottsdale, and Saunders held a one-man show of DeGrazia’s work. To their amazement, it was a smashing success, and from that time DeGrazia’s reputation was insured and he stayed exclusively with Saunders.

In addition to painting, he also did textile designs and traveled to New York for that venture but was unhappy being away from Arizona and the Indian subject matter that inspired him. A piece that brought him national renown was Los Ninos, the Christmas card he designed as a commission from UNICEF. Over five million boxes of cards were sold. Following this success, he had a wide distribution of his work in many forms–prints, serigraphs, decals, collector plates, needlepoint, cards, books and even key chains. He also wrote several books on painting. For a man of humble beginnings, he became an artist with many financial rewards and personal satisfaction of doing what he wanted to do. In 1976, he protested for himself and for other artists who had achieved financial success by burning in the Superstition Mountains some of his paintings because of what he perceived as unfair inheritance tax on artists’ estates.

Ted De Grazia died September 17, 1982, at age 72. He is buried at the site of his Gallery of the Sun near an adobe chapel he had designed and had built to honor the Virgin of Guadalupe. He had also established a De Grazia Foundation to provide funding for exhibitions of his work at the Gallery.

DeGrazia and his work are characterized by their rebellious approach and passionate depiction of Southwestern life. 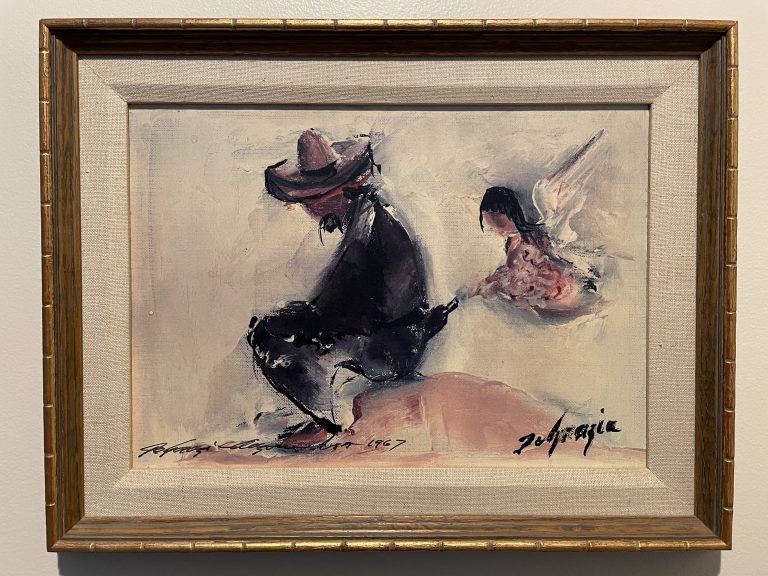 Title:  One For The Road, Two For The Angel` 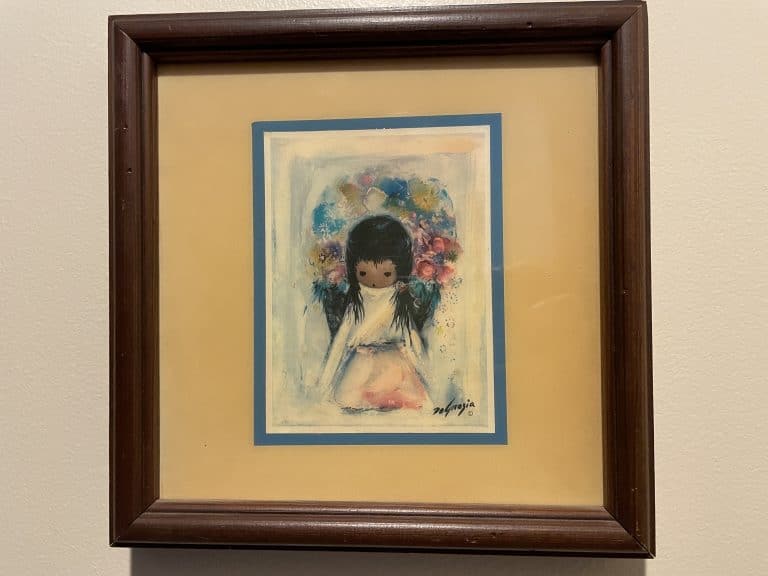 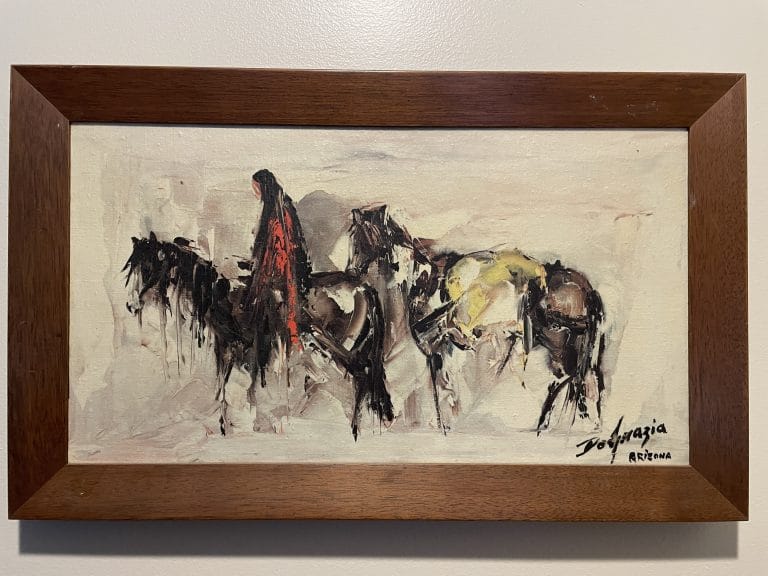 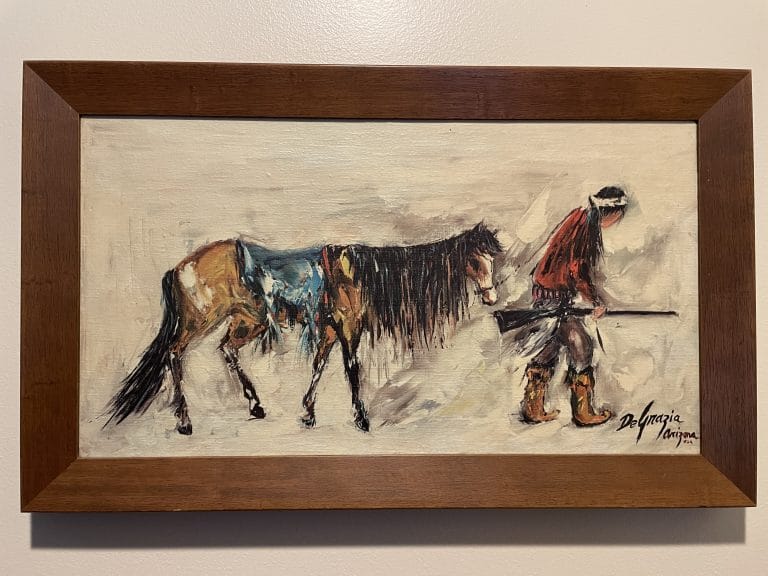 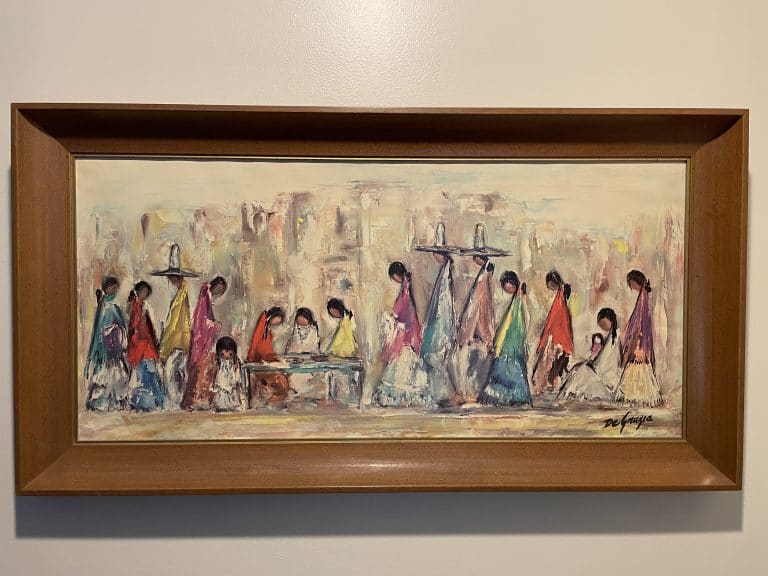 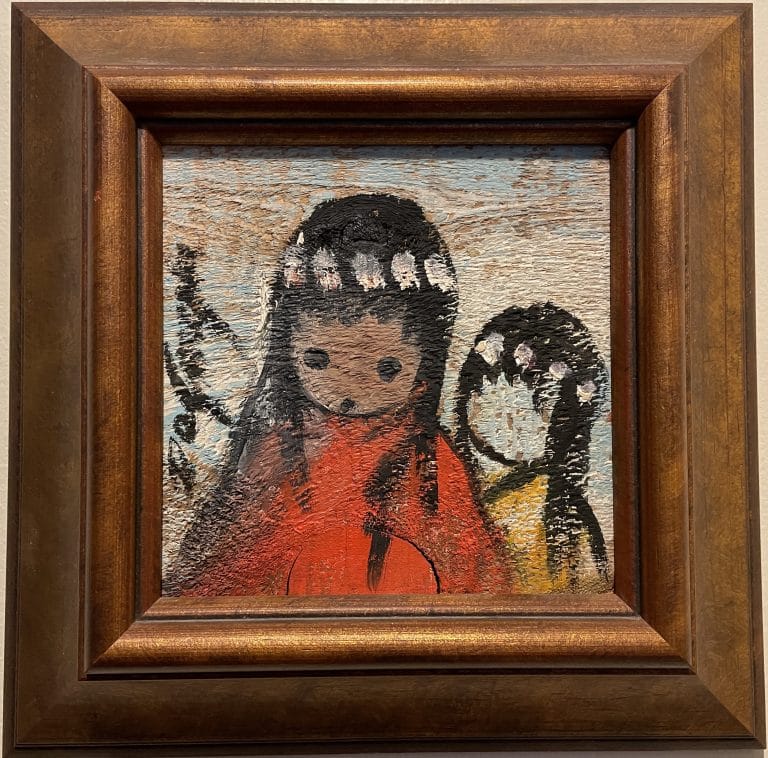 Ted DeGrazia was known for painting on just about anything. Here is a painting he created using wood pieces and ceiling planks from his art gallery, Gallery in the Sun in Arizona.

Signed by the artist on back and front

Writing on back: “From ceiling of DeGrazia Gallery in the Sun 1967.” 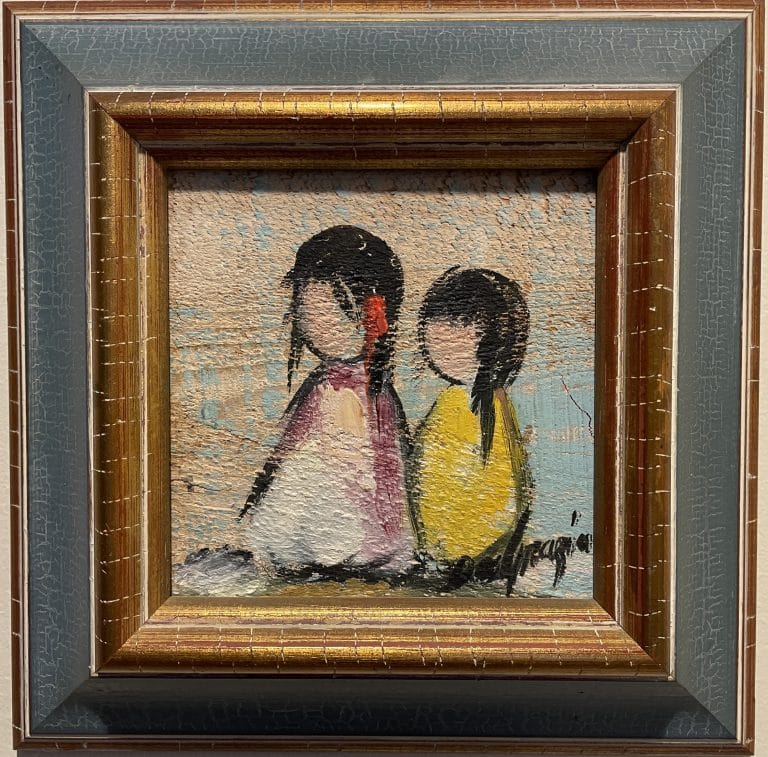 Ted DeGrazia was known for painting on just about anything. Here is a painting he created using wood pieces and ceiling planks from his art gallery, Gallery in the Sun in Arizona.

Signed by the artist on back and front

Writing on back: “To Bill. This piece of wood is from the ceiling of the Gallery in the Sun.”