Bruce Carlton (B.C.) Nowlin was born in 1949 in Alameda, New Mexico. He spent his childhood on the edge of the Sandia Pueblo Reservation. His teenage mother spent her early years in the Laguna Pueblo earning her the Indian name “Little Bird”. His father, Duke, worked in Albuquerque at a highly classified government job. B.C.’s Native-American friends gave him the symbol; the bird-and-moon, a calligraphic logo he signs to every piece of artwork.

His southwestern roots and his intimate relationship with Native American history and culture have a strong influence on his work. His paintings are vibrant and intense. His use of color and imagination is exceptional. Each piece is filled with emotion and illustrates a journey, both for him and his paintings. His work often portrays universal places filled with mystery and spirituality and tribes of every nation moving towards brighter destinations.

Available Items by BC Nowlin 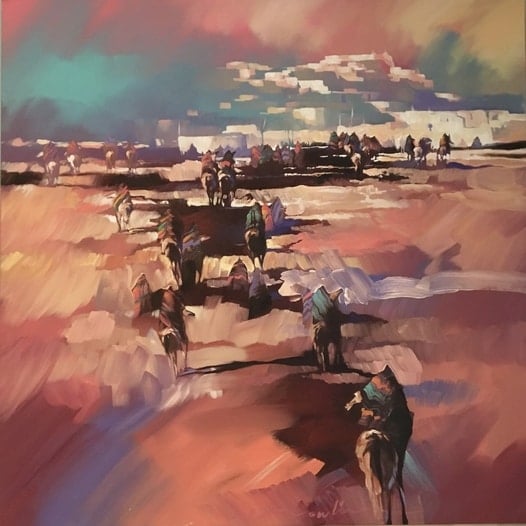 BC Nowlin Into Passage of Time 46×46 Oil Painting

BC Nowlin Item BC Nowlin Into Passage of Time 46×46 Oil Painting Canvas Native American Indians DESCRIPTION Artist:  BC Nowlin (bio below) Title:  “Into The Passage of Time” Size”  46″ high x 46″ wide Signed:  Yes Frame: Gallery wrapped.  Hang as is or frame with a frame of your choice.