Ace Powell was a prolific painter, etcher, and sculptor of Indian, cowboy, and horse imagery in the tradition of Charles Russell.

Powell was born in Tularosa, New Mexico but grew up in Apgar, Montana where his father worked as a wrangler, packer, and guide at Glacier National Park. He attended high school on the Blackfeet reservation in Browning before enrolling at Montana State University. In his early twenties, Powell worked as a wrangler on the Bar X6 ranch out of Babb, Montana, managing horses for the Glacier Park concessionaire.

As a youngster, Powell became acquainted with Charles M. Russell whose summer home, Bull Head Lodge, was located in Apgar. Encouraged by Russell and his protégé, Joe de Young, he took a few private art lessons, but most of his early training came through trial and error and observing the work of other artists. He worked hard at developing his painting and sculpting skills, but he apparently did not make much of a living from his art until the late 1930s, when he built a studio in Choteau, Montana.

After Powell’s first wife died in 1941, he joined the Army, worked in a defense plant, and sold plastic figurines. In 1952 he enrolled briefly at the University of Montana on the GI Bill but disliked the academy’s move toward abstraction, so he dropped out and took the Famous Artists School correspondence course. That same year, he married a fellow artist, Nancy McLaughlin, and the couple settled in Hungry Horse, Montana (just south of his boyhood home) where he operated a studio/gallery. After the studio burned in 1964, Powell divorced again. He married Thelma Conner the next year and the couple moved to Kalispell, Montana.

During the 1970s, Powell tried to promote Kalispell as an artists’ colony. His studio always was open to both aspiring and established artists, and he gave an early boost to well-known Montana painters such as Fred Fellows, Bud Helbig, and Joe Abbrescia. Powell’s son, Dave, is a painter working in the style of his father and is a member of the Cowboy Artists of America.

Powell is thought to have created 12,000 to 15,000 artworks over the course of his life. He felt he was most successful working in oil, but he also produced watercolors and etchings in addition to sculptures in bronze, terra cotta, and wood. In 1965 Powell wrote and illustrated a book of recollections and anecdotes entitled The Ace of Diamonds, an image of which served as his logo throughout his artistic career. 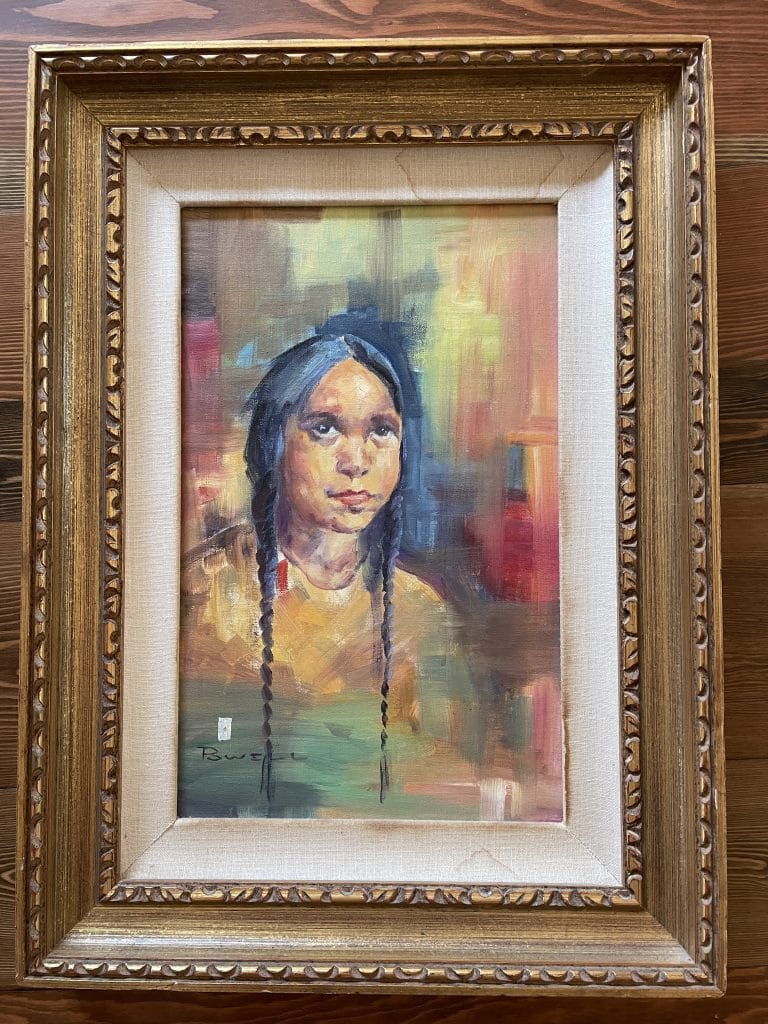 Signed:  On front with Powell’s classic Ace of diamonds card

Condition:  Has evidence of moisture damage on back of board and on mat. Painting itself appears ok. Minor wear and tear to frame.

This painting is also available on our eBay store unless sold.