Jacques & Mary Regat, a husband and wife team of sculptors unite their talents in the creation of their work. Their art is a bold statement of their inner feelings, of their deep ties to the land of Alaska, its people, history, legends, and the greatness of its rugged wilderness.

Jacques’s career began in France where he taught himself to paint and carve in clay, wood and stone. At the same time working with metal while learning the trade of machinist, tool and die maker which eventually led him to graduate from the College d’ Enseignement Technique De Vitry, France. He also apprenticed himself to an Italian carver and a Chinese decorator. In Alaska while sharing his talent at the Native Welcome Center he developed a strong kinship and respect for the cultural myths and history of its people, which became an inspirational theme reflected in many of his works. He graduated cum laude from the University of Alaska in Anchorage, with a bachelor’s degree in Fine Arts and Anthropology minor.

Upon moving to Alaska from Minnesota in 1963 Mary has worked full time as an artist. She studied art at the University of Alaska, European art in France, Mayan Toltec art in Central and South America. Capturing the emotions and moods of her subjects, her impressionistic style is expressed in bronze, lithography, and painting. Her work is shown in over forty galleries in the USA.

While living in Anchorage Jacques and Mary met and married, they began combining their talents to create pieces that extended beyond what either one could do alone.  Working together on some projects and also maintaining the independent pieces they have created a beautiful and varied collection of bronze works. Together they studied art at the University of Alaska, Mayan Toltec art in Central and South America and European art in France. By invitation of the Pope, Jacques & Mary participated in the Jubilee 2000 celebration-honoring artist at the Vatican in Rome.

The Regat’s are currently working in bronze, silver, wood and stone. Jacques and Mary have enjoyed, sculpting in large scale and have many monuments listed herein: 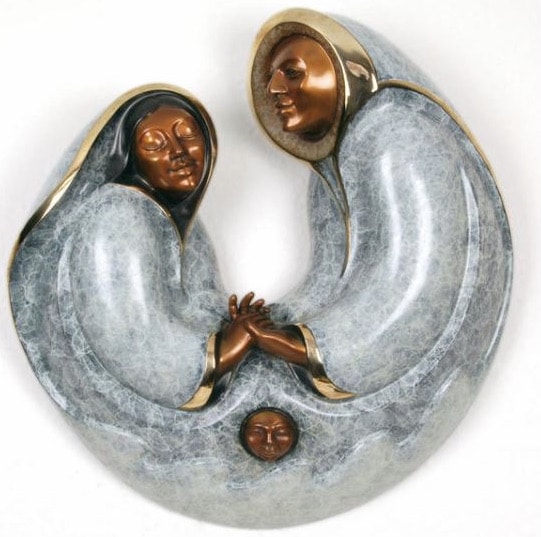 Artist Statement About This Piece:  “Oh sun you reached my heart today and sparked a new desire. Captivated am I by this silent moment of revival. Oh place your sweet lips gently on my parched desert fire and reveal this new beginning. A tender moment, eternity, my soul hears you whisper to me, stirring life. Reaching out we touch and Life begins anew.”

Title: The Sun Kissed the Earth and Life Began Anew

Shipping is extra and will be calculated to your location