Acclaimed by critics and collectors alike, Trevor V. Swanson is one of the most gifted and promising wildlife artists in the world today. Coming from a long line of talented artists, Trevor is a brilliant example of inspired talent passing from one generation to another. Trevor started painting at a very young age. Almost intuitively, he acquired an appreciation for the realism detail and value systems essential to wildlife rendering. Through patient study, he further mastered the technical skills needed to create truly outstanding works of art.

Trevor began his professional career at the remarkable age of 20, and was quickly recognized for his artistic prowess. Within a few years, his paintings were hanging in some of the world’s most prestigious art shows, museums and private collections. By the age of 25, he had won several artistic competitions, including the coveted “Artist of the Year” award from the Foundation for North American Wild Sheep. As a result of his exceptional talent, Trevor’s reputation has soared to an early prominence in the world of fine art.

An avid outdoorsman, Trevor never goes far without a camera or sketch pad. For Trevor, the creative process begins with the insight and emotional response he gleans directly from wild animals in their natural settings. In his quest for subject matter, Trevor has traveled extensively throughout North America, Europe and Africa. His intense desire to capture rare and beautiful moments in nature has taken him to the extremes of geography. This includes the highest cliffs of Canada, the hottest deserts of Mexico and the deepest swamplands of Africa. His enthusiasm for his subjects has, at times, brought Trevor too close for comfort. Over the years, he’s been charged by hippos, chased by crocodiles, and tossed into the air by a cape buffalo. He’s even felt the rumble of an active volcano. To Trevor, however, this kind of peril is just part of the adventure that comprises his art. “Anyone who has encountered a wolf eye-to-eye in the wilderness can tell you it’s exhilarating.” says Trevor. “Nothing compares to the grandeur of an eagle perched high atop a snow-covered mountain, a sinewy leopard creeping like a shadow across a dry desert, or a magnificent bear effortlessly running across a muddy sandbar. These are the sights and sensations that inspire the most powerful images on canvas.”

While Trevor begins his exploration in the wilderness he pursues a much deeper discovery on canvas. On one level, his artwork celebrates the majesty of untamed wildlife and beauty of unspoiled environments. On another level, it expresses a keen sense of the drama and emotion found only in the wilderness. On yet another level, through its intense realism, Trevor’s art captures that briefest moment in time when nature reveals her spirit. “I paint realistically, because the beauty of life is in the little things. The multi-colored moss growing on the rock where a wolf is standing, the light beaming through tree branches onto the fur of a bear; these are the details that breathe life into the painting. I try hard to portray these subtle elements of tone and mood because they complete the story being told.”

Trevor’s paintings also reflect his pervasive philosophy on mankind’s place within nature. “I see humans as the caretakers of our planet,” explains Trevor. “It is our obligation to preserve the Earth’s delicate balance for future generations. And the first step is opening our eyes to all its mystery and wonder. There is so much beauty in the world as it is, mine is the task of capturing that beauty to show others what we have to lose.” Meticulous and masterful, Trevor Swanson is already an important force within the world of wildlife art. Motivated by his enduring passion, Trevor will continue to pursue his artistic gift, painting the sensational images of nature that touch our hearts, and stay in our mind’s eye forever. “I love to lose myself in the rich color and vivid detail of my own brush strokes and discover only later where it has taken me. It gets more exciting all the time. I also love to see the response people have to my work. While sometimes nerve-wracking, it is always deeply rewarding to see how much someone enjoys a painting that I have put my heart into. 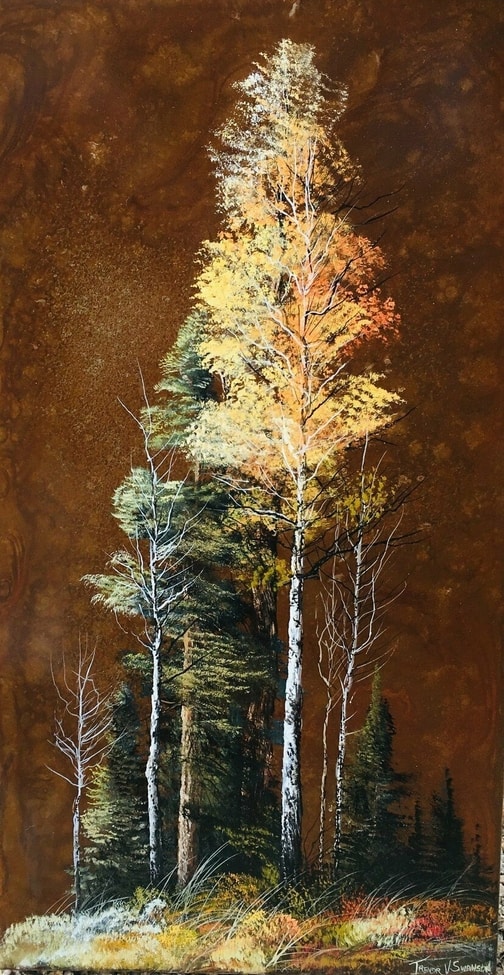